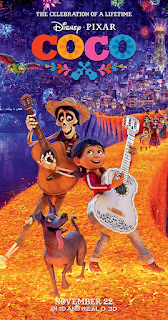 This is middling Pixar, so it's merely... brilliant. (IMDb currently has it ranked as the best Pixar, and the 39th best film of all time, which is somewhat overselling it.)

One of Pixar's strengths is that it doesn't shy away from adult themes - in this case, death. The story world is inspired by the Mexican Día de los Muertos, and whilst it touches only lightly on death it was sufficient to scare my film-hardy 6-year-old. But this movie is infused with colour and music and family values, and it's a delight to spend time with.

It's about a boy who defies his family to pursue his dream of becoming a musician, but in the process falls foul of a curse that sends him to the land of the dead - where he must untangle some family secrets to be able to return.

There's another recent animated kids' film that's also very colourful, very musical, and very much inspired by the Mexican Day of the Dead, The Book of Life, which I also enjoyed. I wonder why it didn't get the same hype as this one. Even the two stories are a little similar - here's the IMDb tagline from The Book of Life, adjusted so it describes Coco instead:

ManoloMiguel, a young manboy who is torn between fulfilling the expectations of his family and following his heart, embarks on an adventure that spans threetwo fantastic worlds where he must face his greatest fears.