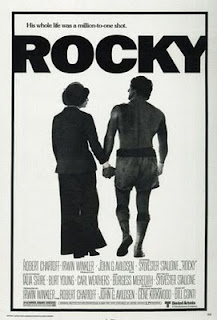 What a great film.

Rocky Balboa is a thoroughly likeable underdog character. Poor, uneducated and ungraceful, but a real good guy. When he gets a once-in-a-lifetime wildcard opportunity to fight for the World Heavyweight Champion title, he begins a life-changing battle with his own self-doubt. A battle I - and possibly everyone - can identify with.

The small-time domestic scenes that build the story up are contrasted by the tense and unflinchingly brutal climactic fight. Sly Stallone admirably puts his all into the character. You would believe he used to be a boxer, rather than a beauty school dropout. (True!) Stallone deserves extra credit for having written the screenplay himself as a remarkably successful attempt to kick-start his acting career.

The story was inspired by a fight between Muhammad Ali and Chuck Wepner in 1975. Chuck was thought to be a no-hoper, but he defied all expectations by lasting 15 rounds against Ali - even succeeding at knocking him down at one point. Stallone saw the match, and turned it into a piece of cinema legend.

The scene with Rocky running up the steps of the Philadelphia Museum of Art was one of the first uses of a Steadicam. It's probably the second most famous steps scene in movie history after the Odessa steps in Battleship Potemkin. The steps are now known as the Rocky Steps, and feature a permanent statue of Rocky at their base.
Posted by Charlie Fish at 9:37 am