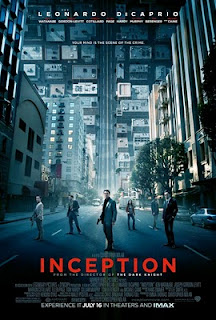 Just came back from watching the IMAX premiere of this with a few friends. I don't think I've come out of a film and talked about the plot - and the ending - so much since Donnie Darko. Without giving anything away, the last ten seconds of the film show something completely mundane, but had the whole room on the edge of their seats. When the screen went black, there was a collective gasp and spontaneous applause.

So, definitely entertaining. Definitely tense. Sufficiently clever and ambiguous to stir up a few hours of après-film conversation. Christopher Nolan has successfully maintained his near miraculous record of directorial excellence.

The central concept of stealing (and planting) ideas within people's dreams allows for some beautiful images of bending cities and gravity-defying hyperreality. Inception owes a lot to The Matrix, perhaps with sprinklings of Synecdoche, New York. Subtle it is not, but who needs subtle - this is Hollywood.

However, it has flaws.

Don't get me wrong, I heartily recommend this film. It's a big-screen film, confident and ambitious. But I think it suffers (although not nearly as fatally) from the same problem as the Matrix sequels. (Let's speak of them just this once, and then never again.) It is an overdose of exposition plus action. The plot is so complicated and so carefully laid out that character and emotional involvement feel squeezed into the edges.

As far as dream-within-a-dream films go this might beat Vanilla Sky, but I prefer the disorientation of eXistenZ or the emotion of Eternal Sunshine of the Spotless Mind. Still, I would gladly watch Inception again.

(Side note, David Walliams was sat behind us!)
Posted by Charlie Fish at 1:36 am