This film must have been uproarious when it was released, a kind of Something About Mary of the Fifties, and it still has bucketloads of charm. With its classic plot and timeless slapstick humour, it's funny, sexy, and more than a little risqué (sufficiently so that it received a Condemned rating from the National Legion of Decency).

Jack Lemmon and Tony Curtis look like they're having a lot of fun wearing lacy frocks and high heels, and Marilyn Monroe steals the show with her boop-boop-a-doop style. 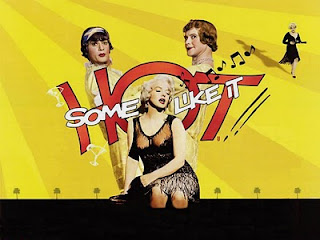 Some Like It Hot was released at the end of the repressive 1950s at a time when the advent of television was threatening, and the influence of the Production Code's censorship restrictions was weakening. Director-producer Billy Wilder challenged the system with this gender-bending comedy, filled with sexual innuendo, unembarrassed vulgarity, free love, spoofs of sexual stereotypes (bisexuality, transvestism, androgyny, homosexuality, transsexuality, lesbianism, and impotence), sexy costuming for the well-endowed, and a mix of serious themes including abuse, alcoholism, unemployment, gangsterism and murder.

Stories abound of Marilyn Monroe's erratic behaviour on set, often showing up several hours late and forgetting her lines. She suffered from stage fright and refused to leave her dressing room, or sometimes insisted numerous retakes of simple scenes until she was satisfied. She apparently required 47 takes to get "It's me, Sugar" correct. After take 30, Billy Wilder had the line written on a blackboard.

She disliked Tony Curtis after hearing that he had described their love scenes as "like kissing Hitler." In his 2008 autobiography, Curtis notes that he did make the statement to the film crew, but it was meant as a joke.

During filming, Monroe discovered that she was pregnant. She suffered another miscarriage in December 1958, as filming was completed. None of this troubled personal life comes through on screen, though; all we see is Marilyn's trademark sultry dumb-blonde magic.
Posted by Charlie Fish at 12:54 am