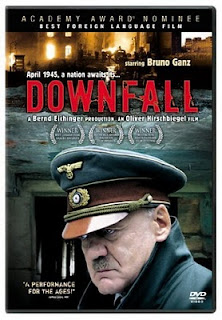 This film is critically acclaimed, particularly for faithfully depicting the last days of the Third Reich from a lesser-known perspective (inside the Führerbunker), and for breaking the taboo of having a German actor portraying Hitler. Indeed, Bruno Ganz's much parodied performance is exceptional.

Some controversy was stirred by the perception that this movie renders Hitler as a fallible human being rather than an inhuman psychopath - although I agree with the critics who argue that such an interpretation is probably more realistic (after all, he was sufficiently charismatic to seduce a nation into barbarism), and it certainly doesn't go so far as to inspire sympathy for the man.

But beyond these worthy features, this films feels basically like a dramatised feature-length BBC-style documentary. Granted, a high quality and involving documentary, but it's hard to shake the feeling that you're sitting through a rather interesting lecture instead of an epic historical film.

Bernd Eichinger's script relies on several historical sources including Traudl Junge's autobiography (the film includes archive footage of an elderly Junge herself speaking about her stint as Hitler's secretary in the bunker); and Director Oliver Hirschbiegel made efforts to accurately reconstruct the look and feel of the bunker. So, you can expect a good dose of historical accuracy, although there are also notable omissions such as the widespread rape of German women by Soviet soldiers after the capture of Berlin.

A disturbing bit of trivia from IMDb: The button that Adolf Hitler removes from his jacket and gives to Magda Goebbels is a Gold Nazi Party badge, awarded to high-ranking party members who had constant membership from 1925. Hitler gave himself Badge No. 1 in 1933, even though he was not the first party member. The Soviets found the badge in the bunker and it was stored in a vault at the Lubyanka, the KGB headquarters. In 2005 the FSB, the Russian Federation successor to the Soviet KGB, put the badge on display. In November that year, it was stolen in a brazen smash-and-grab raid. The burglar escaped even though he triggered the display alarms. So far, it has not yet been recovered.

I worry about the mindset of whoever has that on display in their living room.
Posted by Charlie Fish at 12:04 am