How To Train Your Dragon

Dreamworks SKG was set up in 1994 by industry heavyweights Steven Spielberg, Jeffrey Katzenberg, and David Geffen. The animation arm later spun off as a separate company.

Dreamworks Animation has had nothing like the consistency of Pixar’s output, but has produced some great films along the way: Antz, Shrek, and its partnerships with Aardman Animations stand out in particular.

To those stand-out films, I would be tempted to add How To Train Your Dragon. 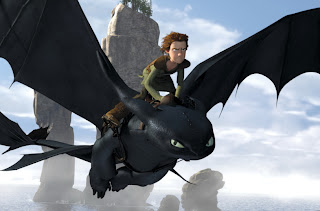 Set in a fictional world of dragon-besieged Vikings, the weedy protagonist discovers a revolutionary secret - the dragons aren't necessarily all that bad. The story that ensues, based on Cressida Cowell's book, is wonderfully inventive and action-packed, with some beautiful imagery. It would kick ass in 3D.
Posted by Charlie Fish at 1:00 pm