This film is pretty cool with its overblown metaphors, visually striking set-pieces, pseudo-medieval setting and funky-sounding Swedish. But I felt like it went over my head. I let the story wash over me, but never really got into it. 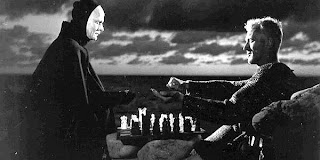 It's about a knight who is trying to escape the spread of the Black Death, while playing a game of chess with the Grim Reaper.

Director Ingmar Bergman was inspired by a 15th century church painting of a man playing chess with a skeletal Death, in Täby kyrka, north of Stockholm.
Posted by Charlie Fish at 1:32 am