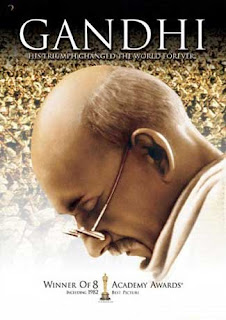 My brother in law said that to appreciate the range and talent of Ben Kingsley, I had to watch Sexy Beast and Gandhi back to back.

I did, and they're both brilliant films, with Kingsley delivering truly exceptional performances. Gangster or guru, he makes the part his own.

In fact, Kingsley (born Krishna Bhanji) has Gujarati ancestry, and Gandhi himself came from Gujarat. Kingsley achieved such a good emulation that locals were said to have thought he was Gandhi's ghost.

Gandhi is a sweeping epic with a cast of thousands and a brisk pace that belies its three hour running time. Telling the story of the man who led India to independence and inspired the world through his philosophy of nonviolent resistance, the film captures the essence of the legend without ever straying too far from the truth for the sake of the story.

The film achieves a fine balance. The British Empire's administrators come across as arrogant and often misguided, but only with such a thoroughly civilised nation would nonviolent resistance ever have worked. In the end, the Empire's respect for the rules and sense of shame for its mistakes earn a measure of credit. There are plenty of oppressive regimes around the world against which Gandhi's enormous discipline would have been wasted.

This is pretty much the best film that could have been made about Gandhi's life, and a testament to Richard Attenborough's talent and commitment - particularly considering he had to find funding for the film himself.

And funding was no mean feat for such an ambitious film. 300,000 extras appeared in the funeral sequence. About 200,000 were volunteers and 94,560 were paid a small fee. The sequence was filmed on 31st Jan 1981, the 33rd anniversary of Gandhi's funeral. 11 crews shot over 20,000 feet of film, which was pared down to 125 seconds in the final release. That had to be an expensive sequence - easy to imagine a studio refusing to bankroll it.
Posted by Charlie Fish at 10:51 am