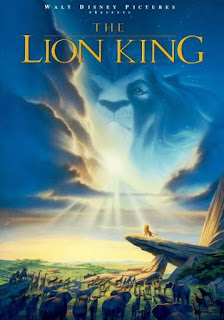 This film announces itself as something special in the first five minutes. A sweeping panorama of the African savannah with swarms of animals gathering to welcome a newborn lion prince, set to Elton John and Tim Rice's beautifully crafted song "The Circle of Life" - and then, boom, the title screen. Awesome.

The visuals are stunning throughout, but what really makes the movie is the dramatic story (inspired by Hamlet) and the thoroughly musical sense of humour.

It's very telling that the recent re-release of the film in 3D has seen it rocket more than 20 places higher in IMDb's ranking - a sign that this (mostly) hand-animated marvel has endured into the age of ubiquitous CGI.

Arguably the peak of the 90s Disney Renaissance, and one of the best (non-Pixar) Disney animated features ever.
Posted by Charlie Fish at 6:55 pm