Once Upon a Time in the West 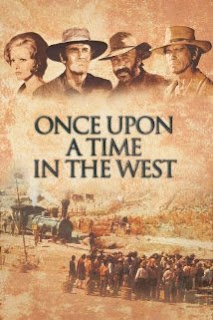 The fact that this is often lauded as the best Western movie ever made confirms to me that I'm not a fan of the genre. Pioneering and railroad building and strong characters (male and female) should be right up my street, but honestly I find it hard to have patience for the whole slow paced, lonely desert, angry men, badly dubbed thing.

Having said that, even if I wasn't at the edge of my seat, I appreciated the massive amount of artistry in this film. I suspect that, now I know what to expect, my enjoyment of it would only grow if I watched it again. (And I am prepared for the mindset I'll need to enjoy director Sergio Leone's Dollars trilogy whenever I get round to watching that.)

Mrs. McBain travels from New Orleans to move in with her new family in frontier Utah, only to find them murdered. But by whom? And why? The prime suspect befriends her and offers to go after the real killer, accompanied by the mysterious Harmonica man on his quest to get even.

I was fascinated to learn that (as well as Bernardo Bertolucci) horror master Dario Argento had a hand in creating the story. How much, I wonder, of the success of 1960s Italian-made "Spaghetti" Westerns in subverting and enriching the genre is down to the creative cleverness of these men, and how much is simply down to approaching the subject matter from a different, more detached cultural context?

Interesting that Clint Eastwood was offered a role, but turned it down. He was getting offered roles a grizzled gunman in 1968?! That guy must be SO OLD by now.

Ennio Morricone's score must also be mentioned as a highlight.
Posted by Charlie Fish at 5:39 pm