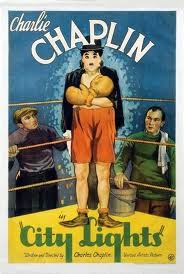 A tramp falls in love with a blind flower girl, and woos her with the help of an unreliable millionaire friend.

My reaction to this (American) film was pretty much the polar opposite of my reaction to Metropolis, a contemporary German film that I watched last year. Metropolis felt messy, overacted, unsubtle - but awesome, epic, stylish. City Lights is neat, gentle, sweet - but... well... just a little bit dull.

The movie calls itself out as a pantomime, and it certainly excels at that, with Charlie Chaplin's wonderful comic timing, choreography and pathos carrying the story along. I watched it with my nearly three-year-old daughter and she loved it.

Anyway, I am clearly in the minority with my under-enthusiasm. Orson Welles said this was his favourite movie; Albert Einstein attended the American premiere and George Bernard Shaw the British one. The American Film Institute ranks it as the 11th best film of all time.

This was Charlie Chaplin's first film made during the sound era. He faced extreme pressure to make the film as a talkie, but such was his popularity and power in Hollywood that he was able to complete and release the film as a silent (albeit with recorded music) at a time when the rest of the American motion picture industry had converted to sound.

Charlie Chaplin, ever the stickler, allegedly re-shot the scene in which his character the Little Tramp buys a flower from the blind flower-girl 342 times, as he could not find a satisfactory way of showing that the blind flower-girl thought the mute tramp was wealthy.
Posted by Charlie Fish at 10:44 pm