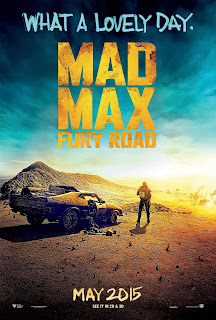 I enjoyed Mel Gibson's Mad Max when I was a kid, so I thought I knew what to expect with this, and initially I didn't intend to go see it at the cinema. But then I saw it rocketing towards the top of IMDb's Top 250, so I gave it a chance.

It felt like being in the front row of a thrash metal concert for two hours. Seriously intense.

I can't think of the last time a film packed so much over-the-top action into what is essentially one epically extended chase scene without giving almost any respite at all, and yet was still compelling. The stunts - mostly done for real - are impressive, the disdain for action movie conventions is refreshing, the acting is persuasive, and the story has surprising narrative heft.

It is surprising that this film got made after languishing in development hell for over two decades, and even more surprising that George Miller was at the helm, the same director of the last three Mad Max movies, even though the last action flick he directed was 30 years ago and since then all he's done is Babe: Pig in the City and Happy Feet.

It was originally conceived back in 1998, and slated to be shot in 2001, until the September 11 terrorist attack put the kibosh on that. Another attempt in 2003 failed because of security concerns related to trying to film in Namibia and the outbreak of the Iraq War. By 2007, after Mel Gibson lost interest in the role, Heath Ledger was rumoured to be the next Mad Max, before he died from an overdose in 2008. (Really - that was 7 years ago already?) In 2009 the project was briefly recast as a 3D animated movie. In 2011 principal photography started in Australia, but heavy rain (not great for a desert movie) forced a move at the last minute to Namibia.

Yet, somehow, it got made. And, somehow, it's a blockbusting hit. Bravo.
Posted by Charlie Fish at 11:02 pm