The Bourne trilogy collectively represent the best action thriller films of the Noughties, and The Bourne Ultimatum tops the series off brilliantly. One hundred percent up to date, breathlessly paced, realistic and compelling.

Matt Damon has the Bourne trilogy to thank for successfully reinventing him from Meh Damen into a rock-hard action star.

But the real stars here are behind the scenes. The script is intelligent and economical, Paul Greengrass's direction leaves your head spinning with its blistering pace, the music keeps your adrenalin pumping relentlessly... 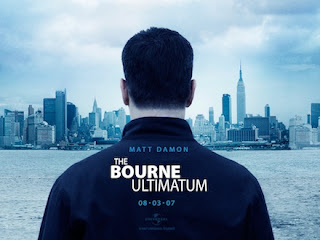 Bourne is so cool that even Bond tried to imitate him - A Quantum of Solace is basically James Bond shoehorned (unsuccessfully) into a Bourne film.

There a couple of scenes where the shakiness of the camera is too intrusive, and Jason Bourne makes at least one decision that seems to be more for dramatic effect than practicality ("If you were in your office right now we'd be having this conversation face-to-face"); but the effect is sufficiently dramatic that all is easily forgiven.

I made the mistake of watching this film late at night; it got my blood going so fast it took me ages to settle down and get to sleep.
Posted by Charlie Fish at 3:08 pm