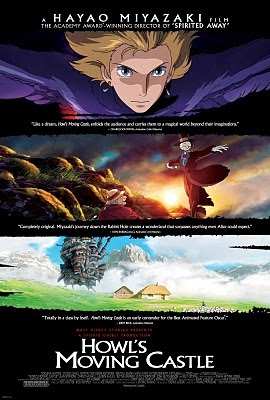 It doesn't have to make sense when it's so beautiful!

Hayao Miyazaki and Studio Ghibli have produced some astonishing films, often casting their characters into strange and colourful lands with mad rules of conduct as a metaphor for growing up.

This particular offering is a loose adaptation of the eponymous novel by Diana Wynne Jones, in which a girl suffers a curse that turns her into an old woman, and she must seek the help of an enigmatic young wizard to restore her youth, averting a war in the process.

The thoroughly Japanese perspective on this British fantasy is enchanting. The lush, ambitious animation is endlessly fascinating. The motivation and arc of the main characters is perhaps not as well developed as in some other Miyazaki masterpieces, but that doesn't stop this from being an inspiring, moving and brilliant piece of work.

I shall have to watch me some more Ghibli.
Posted by Charlie Fish at 12:29 am