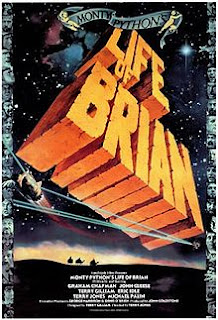 
Very few films can really make you laugh. I'm not talking wry smiles, although Monty Python's Life of Brian delivers plenty of those too, I'm talking infectious belly laughs that make your cheeks hurt. The jokes-per-minute ratio rivals the likes of Airplane! and Duck Soup; the sheer weight of quotable lines ensures that this comedy masterpiece will forever echo through the ages.

And behind the juvenile gags this is a surprisingly intellectual film, featuring a well-researched representation of historical Judea and some insightful satire.

Despite the reverential subject matter (the film is about a man living in the time of Christ who is mistaken for the messiah), the panto-esque comedy is gloriously irreverent, in the true low-budget home-grown scruffy and often surreal Footlights tradition.

Speaking of reverence, this film caused quite a stir when it was released in 1979. It sparked a moral panic centering on its supposedly blasphemous content, and got banned in several countries and UK councils.

At the climax of the controversy, two of the Pythons engaged in a notorious TV debate with the Bishop of Southwark and Malcolm Muggeridge on BBC2 chat show Friday Night, Saturday Morning. The debate itself is wonderfully and hilariously dramatised in the feature-length quasi-documentary Holy Flying Circus, which you can currently watch on BBC's iPlayer. Strongly recommended.

The Life of Brian script was written in the Caribbean, where the Pythons hobnobbed with (among others) Keith Moon, the drummer from The Who. Moon was slated to play a street prophet in the scene where Brian hides among them. Eric Idle saw Moon the night of his death, and remembers him expressing excitement about the role, which eventually went to Terry Gilliam. The script is dedicated to Moon.

According to IMDb's trivia, after the first take of the scene where a nude Brian (Graham Chapman) addresses the crowd from his window, Terry Jones pulled Chapman aside and said "I think we can see that you're not Jewish," referring to Chapman being uncircumcised. This was corrected in subsequent takes with the application of a rubber band.

Always look at the bright side of life...
Posted by Charlie Fish at 12:58 am