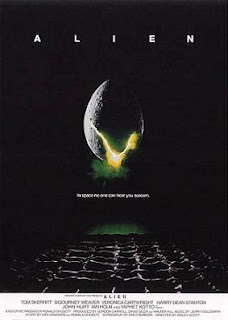 I watched Prometheus a couple of days ago, billed as a prequel to Ridley Scott's Alien, so I had to re-watch the film that started it all.

In Alien, the crew of a mining vessel are woken from stasis to find that rather than having returned home to Earth, they've been roused to investigate a mysterious distress signal emanating from a dead planet. They land and discover an alien spaceship with a long-dead captain, and a roomful of hibernating eggs. Unwittingly, they bring one of the eggs back with them. Bad move.

Much has been said about how nail-bitingly tense and sinister this film is. The twists are shocking, and H. R. Giger's notorious alien delivers the ultimate horror kick.

Prometheus was entertaining, but one wonders why (beyond cynical profiteering) filmmakers feel the need to detract from the artful implication of backstory by actually showing the backstory as a separate movie (I'm looking at you and your crummy prequels, George Lucas). Alien was breathtakingly original - 33 years later, Prometheus delivers nothing new.
Posted by Charlie Fish at 5:41 pm