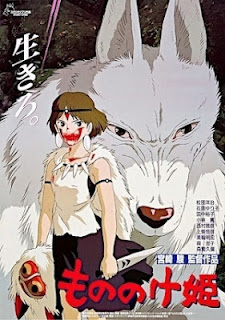 After enjoying Howl's Moving Castle, My Neighbour Totoro, and especially Spirited Away, I was excited to watch the highly IMDb-rated Princess Mononoke.

A demonically possessed hog attacks the town of a forest tribe and infects a young prince. The prince, doomed to suffer a drawn-out and painful death, travels to a faraway land to seek the help of a forest spirit. But the matriarch of the local mining town is in conflict with the forest spirit and its animal denizens, including the eponymous wolf-princess Mononoke, and our hero's fate becomes entwined.

This is a much darker and bloodier affair than the other Studio Ghibli films I've seen, and in my opinion not quite as satisfying. The characters were fun, but I found it hard to empathise with them. I enjoyed the story, but certainly less compelling than it could have been. I watched the English dub (as written by Neil Gaiman) - I wonder if anything was lost in the translation.

The animation is lush and beautiful - the last major animated motion picture to be filmed on plastic animation cels - and the film was phenomenally successful in Japan, the highest-grossing film since E.T. until Titanic came along.

One of the things that most charms me about Studio Ghibli films is the visualisation of Japanese animism. The cute clockwork forest sprites were a highlight.
Posted by Charlie Fish at 5:40 pm