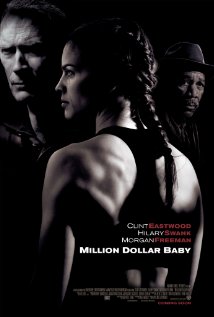 This film, about an ageing boxing coach who reluctantly agrees to train a relentlessly determined and positive woman, does not end up going in the direction you expect, and is all the more powerful as a result.

Clint Eastwood plays almost the same character as in Gran Torino, which is ranked higher on IMDb, but in my opinion this is the superior film. And the Academy clearly agrees with me, having awarded this the Best Picture Oscar (and three others).

You have to admire Mr Eastwood for continuing to direct and act in such compelling and challenging films despite being older than sin - he was 74 when this was released and he's still going strong almost a decade later.

Even more respect to him for sticking with this difficult story, based on short stories by F.X. Toole, despite the typical narrow minded studio reaction to anything that doesn't fit the formula. Several studios refused to fund Million Dollar Baby until Tom Rosenberg stuck his neck out to provide half of the $30million budget. Box office receipts ended up exceeding $200million.

Hilary Swank puts in a stellar performance that would steal the show, except that Clint Eastwood and Morgan Freeman live up to their reputations as masters of gravitas while they compete to see who can be the gruffest old man.

A movie that can be hard to watch, but is full of heart.
Posted by Charlie Fish at 4:09 pm