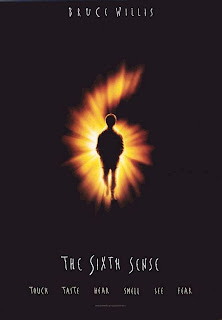 Yet it is a very good film. It has all the hallmarks of his worst stinkers - e.g. schmaltzy monsters, a tendency towards over-earnest cheesiness, an excess of focus on plot for the sake of the twist - yet somehow manages to dodge between the cracks and end up being a satisfying and very touching masterpiece.

Perhaps he should stick to being a writer, and let better directors realise his work - or the other way around. (This was a spec script of his, one twelve released films that he's written as of 2013, ten of which he directed. And one of which is any good. Did I say that already?)

The story is about a child who claims, "I see dead people" (the American Film Institute's #44 movie quote of all time), and the skeptical but kind child psychologist who tries to treat him. Despite trying to avoid spoilers, I heard a little about the twist ending, and for years I dismissed it as sounding too similar to The Others. When I finally got around to seeing it, I was pleasantly surprised. I got so into the film that I forgot about the twist, and when it came it had the full effect. Thrilling.
Posted by Charlie Fish at 3:37 pm