I enjoyed this the first time I watched it; it felt light on plot but very zen - the journey was atmospheric without there needing to be much of a destination. However since my two-year-old daughter fell in love with it and demanded to watch it with me every morning for a week, my appreciation has grown deeper and deeper.

The DVD box back does a good job of summing up my feelings towards this film: "Conceived as a family film without conflict and suffused with the carefree pleasures of the summertime... My Neighbour Totoro shows Japanese animation's famous Studio Ghibli at its very best, and is an elegy to two ever-fading miracles: the fairytale world of childhood and the disappearing countryside." 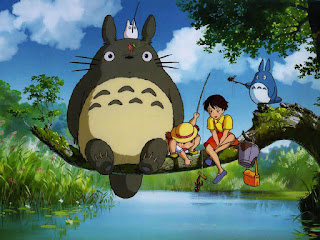 This was originally released as a double bill with Grave of the Fireflies - another film I'd love to watch (and also on IMDb's Top 250). The 25th anniversary edition is in cinemas now.

This was also one of Roger Ebert's favourite movies. He said: "...it would never have won its worldwide audience just because of its warm heart. It is also rich with human comedy in the way it observes the two remarkably convincing, lifelike little girls... It is a little sad, a little scary, a little surprising and a little informative, just like life itself. It depends on a situation instead of a plot, and suggests that the wonder of life and the resources of imagination supply all the adventure you need."

Totoro, the forest spirit, now features in Studio Ghibli's logo and even made a cameo appearance in another all-time great "children's" film, Toy Story 3. 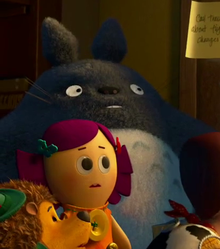