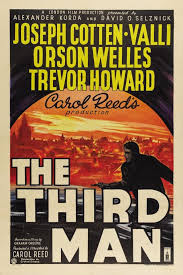 In 1999 the British Film Institute selected The Third Man as the best British film of the 20th century. Having finally seen it for the first time, I can understand that accolade.

Right in the first few minutes, with Anton Karas's jaunty zither theme setting the tone, and an opening scene that signals the seemingly effortless genius of Graham Greene's script, this film announces itself as something special.

The slower pacing of golden oldies in comparison to modern movies sometimes puts me off, but here the pace was just right. I was glued to the screen by the stylishly skewed camera angles (so-called Dutch angles), the angsty post-war historical backdrop, the cleverly twisty unravelling of the mystery, and the wonderful noir-ness - but above all I enjoyed spending time with the characters.

Without wishing to give anything away, I especially enjoyed the very last scene - I thought it perfectly fitting - and I was surprised to see that Graham Greene wanted the opposite to happen. I'm glad that director Carol Reed and producer David O Selznick got their way in the end.
Posted by Charlie Fish at 11:07 pm