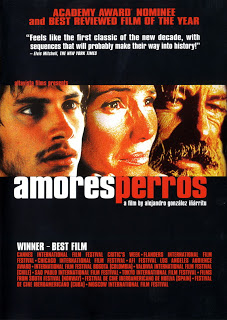 My first experience of director Alejandro González Iñárritu was one of his more recent films, Biutiful, which captured a dark side of life in Mexico City, full of people trapped in vicious cycles of crime and abuse. This is similar, but done with more flair, more character.

Three interlocking (but very different) stories, centring around a car crash, with dogs as a running theme. Superbly acted all round, but especially noteworthy is the standout performance by Emilio Echevarria (playing El Chivo, a political dissident turned hitman), and Gael García Bernal (Octavia, the lovesick dog fighter) in his debut - or at least breakthrough - role.

This is the first of a trilogy, with 21 Grams and Babel following. I'm not in a rush to see the others in the trilogy. No doubt they're just as brilliant, but I bet they're also as depressing. I'm going to load me up a rom com or two first.
Posted by Charlie Fish at 4:43 pm