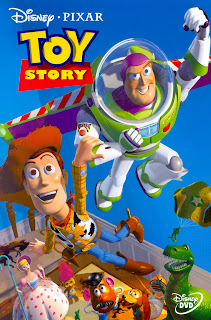 The genre of digitally animated movies owes a huge debt to Toy Story - the first feature film to be entirely computer animated. If this film had been rubbish, the genre might have sputtered and struggled to get going. But with an unblushing emphasis on character and story, animation giant John Lasseter's Pixar (using Steve Jobs' computers) deservedly exploded onto the scene and never looked back.

The early Nineties: Terminator 2 had shown that digital trickery could be used to great effect; Lawnmower Man proved that digital effects were no substitute for a crappy story. After a couple of limp decades, Disney were experiencing a resurgence of success with musical animated features such as Beauty and the Beast and Aladdin. Enter a quirky non-musical feelgood film about toys that come to life, and boom - cartoons are cool again, for adults as well as children.

Re-watching this for maybe the tenth time recently, I continue to be struck by just how wonderful it is. The jokes! The characters! The phenomenal voice work from Tom Hanks! It hasn't aged at all. And it's hard to believe that such a high quality movie could possibly have been matched - perhaps even outdone - by its two sequels. (The best trilogy of all time?)

The story of Toy Story's production, and the hiccups along the way, makes fascinating reading.
Posted by Charlie Fish at 10:39 pm