There aren't many non-animated original musicals at the moment, and perhaps that's why this one has made such a splash. It's firmly in the tradition of Singin' in the Rain-era musicals. It's a love story, and a love letter to Los Angeles (to the point that the navel-gazing Academy nominated it for a record number of Oscars, equalling Titanic and All About Eve). 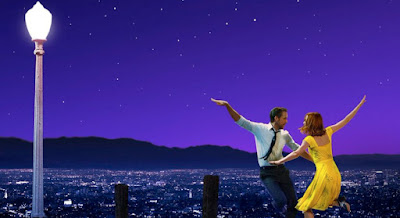 Emma Stone and Ryan Gosling give great performances - they are both utterly charming actors. It's particularly impressive that Ryan Gosling learned to play all the piano music by heart.

It's fizzy and peppy and sweet, with a thoughtful storyline. I liked it a lot. But I don't think I loved it. Too showy for my tastes perhaps? For offbeat musicals, despite being a much smaller film, Once made a much bigger impression on me.
Posted by Charlie Fish at 11:25 pm