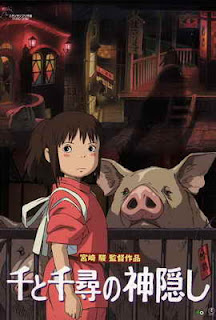 I'm overjoyed to see this film so high on the rankings - and deservedly so. It's a beautifully drawn coming-of-age story told in metaphor, peopled with a cast of spirits and monsters that is so delightfully other. It explores themes of alienation, fitting in, finding yourself, right and wrong, greed... and it carries you like its underwater train without you ever being sure of where you're going to end up next. It is so very strange, and yet resonates on a profoundly deep level.

Director Hayao Miyazaki is a master; this and My Neighbour Totoro are my favourite Ghibli films - they benefit, I think, from their relative narrative simplicity, whereas for me Howl's Moving Castle and Princess Mononoke despite also being high in the Top 250 are too complex and therefore don't hang together as well. (They are also darker in tone, which might be another reason I like them less.)

Incredibly, this film was apparently made without a script - the plot and characters developed organically via the storyboards.

Well, Miyazaki may finally have retired now (after five decades in the industry), but I still have plenty of unwatched Ghibli films to enjoy.
Posted by Charlie Fish at 5:10 pm